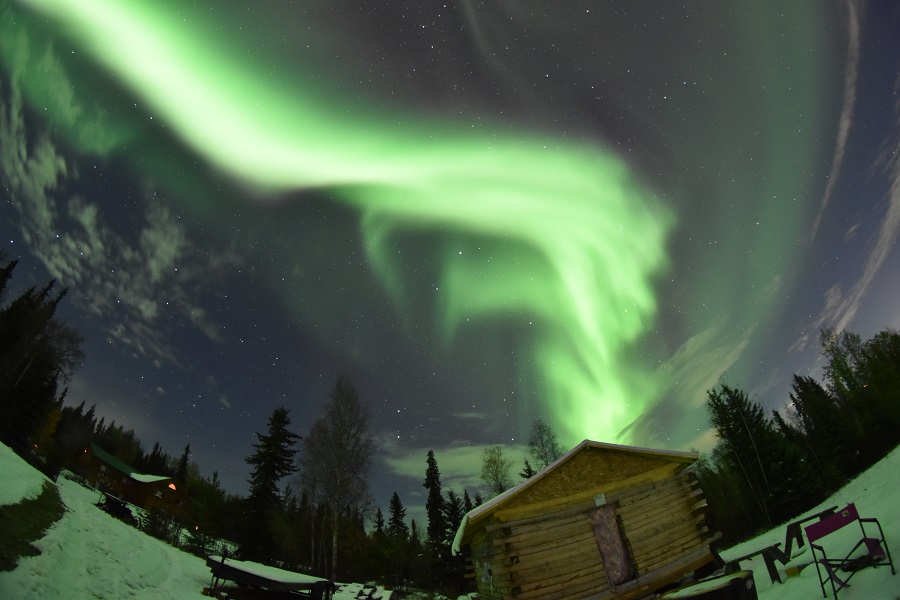 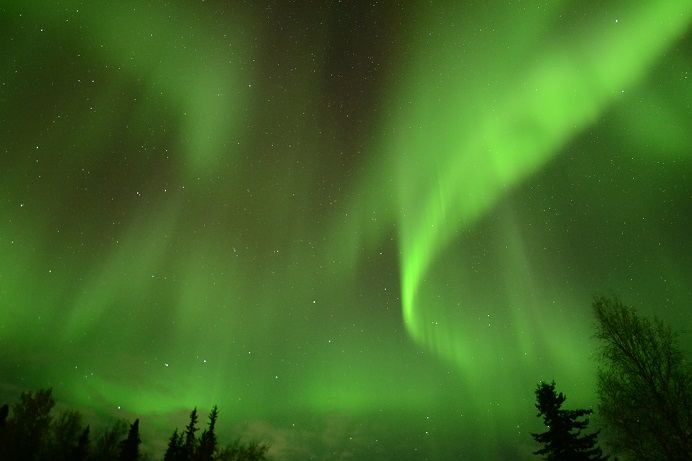 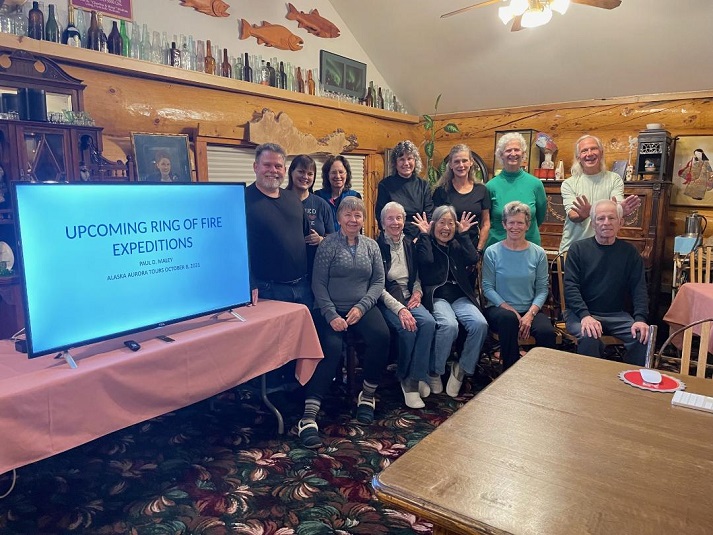 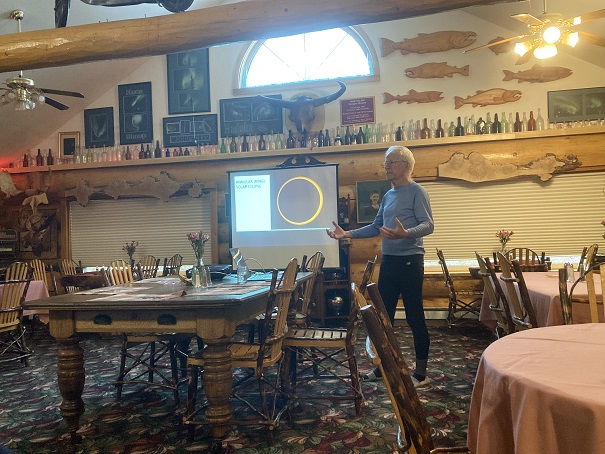 Paul Maley giving a presentation on future expeditions on the next to last day of the 5 day trip in the dining room. Lynn Palmer photo. 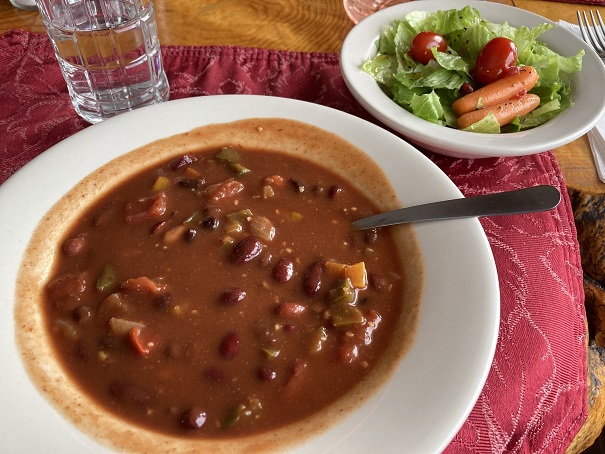 Spicy vegetarian chili as a vegetarian selection was a dish that went over well at lunch. Lynn Palmer photo. 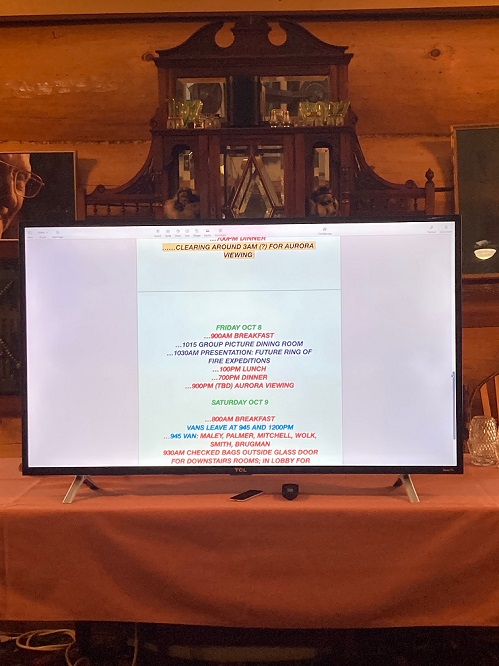 The large TV presentation screen was a new feature for our 2nd group this year; it was also converted into a daily scheduling board where we could not only provide activities but aurora viewing forecasts and instructions for guests for presentations and departure day.  Lynn Palmer photo.

We had two back to back trips in October. This second one was far luckier with aurora seen on two nights.  In particular we had a 45 minute window where the sky was going wild with bright aurora in the west, north and east.  The sky was bright enough that even Iphone camera images were successfully taken. All the Iphone photos below were hand held with stars basically in focus. Even though the trees appear distinct, the aurora have a matted look (rather artistic actually) and do not precisely mimic what could be seen using a DSLR type camera. 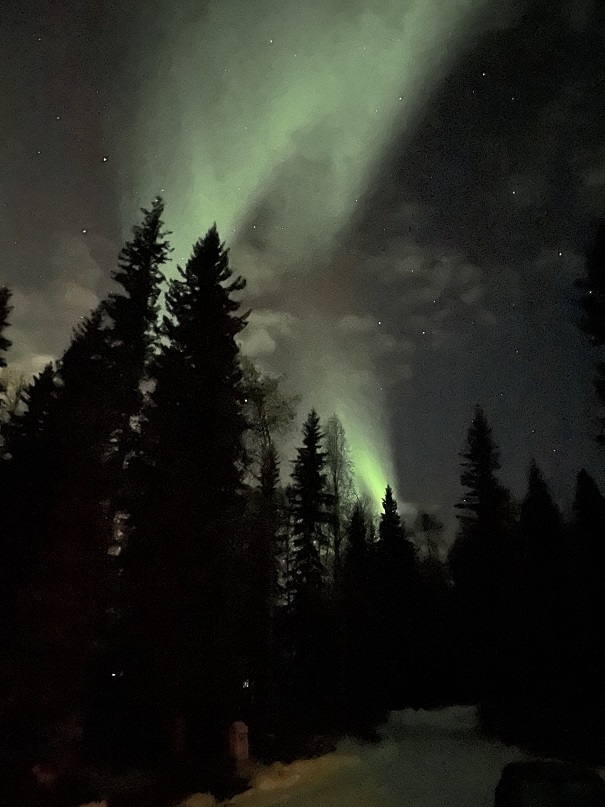 The constellation of Draco is easily recognized in all of these images. Reggie Deriso photo. 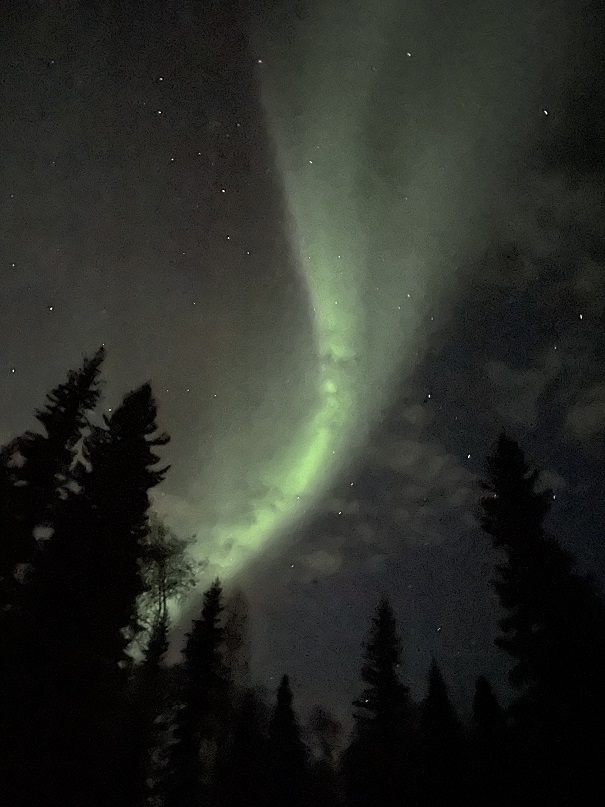 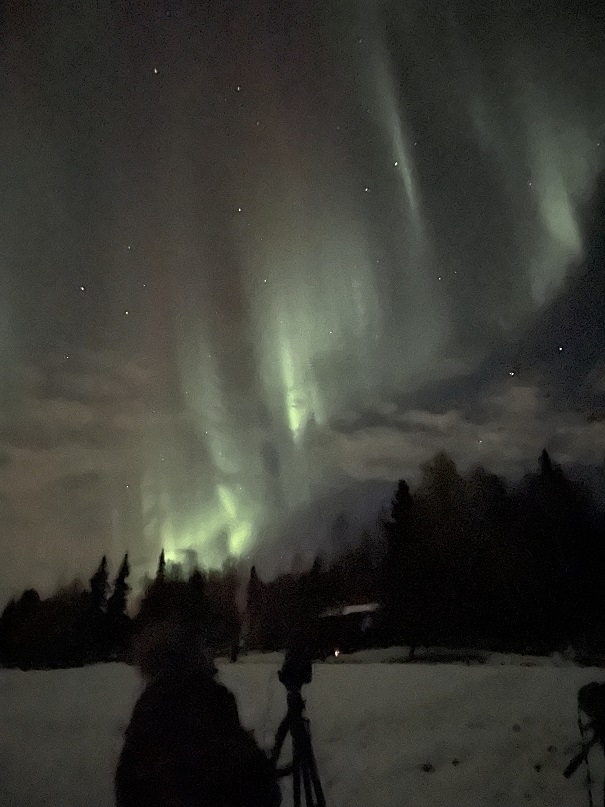 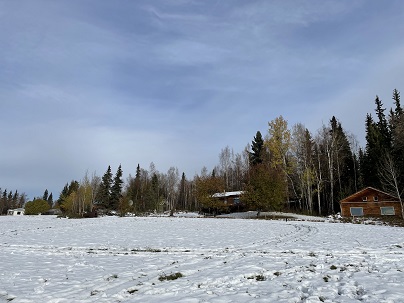 These two images have the same trees and building. Both land features are in focus. It is the aurora that is matted in appearance and this shows that unless there is some intervening software within the camera it is unlikely the images will improve. Still they are impressive.  Reggie Deriso photos.

We had a great display on one morning and here are a few highlights. Space prevents us from posting more than 100 wonderful images that were best seen by the naked eye! 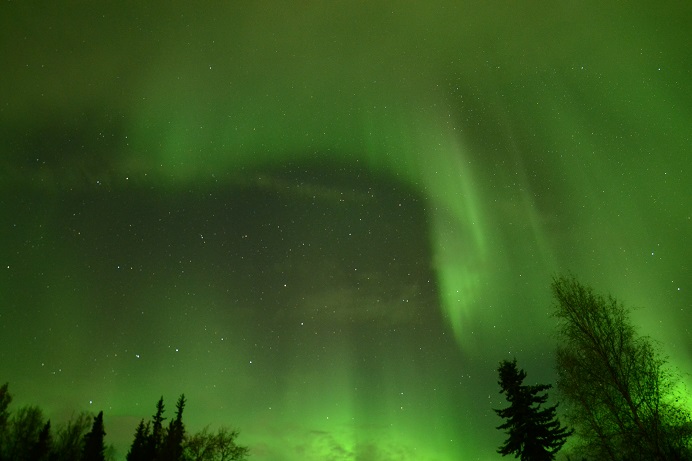 Curtains revealed themselves as a classic feature of this Northern Lights display.  Lynn Palmer photo. 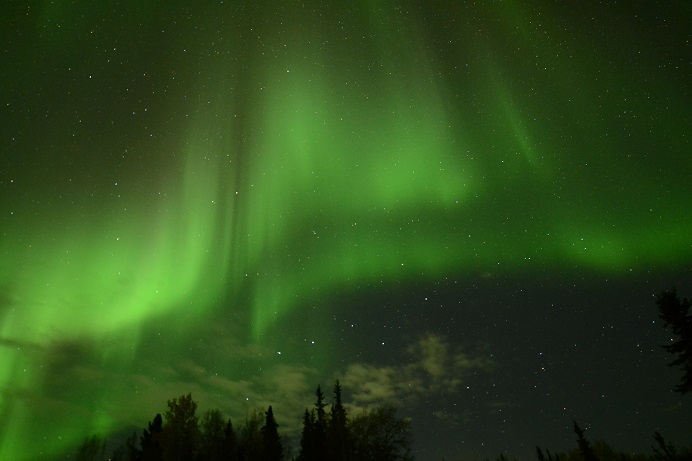 Twists and turns occurred as time passed. The time scale was on the order of tens of seconds.  Lynn Palmer photo. 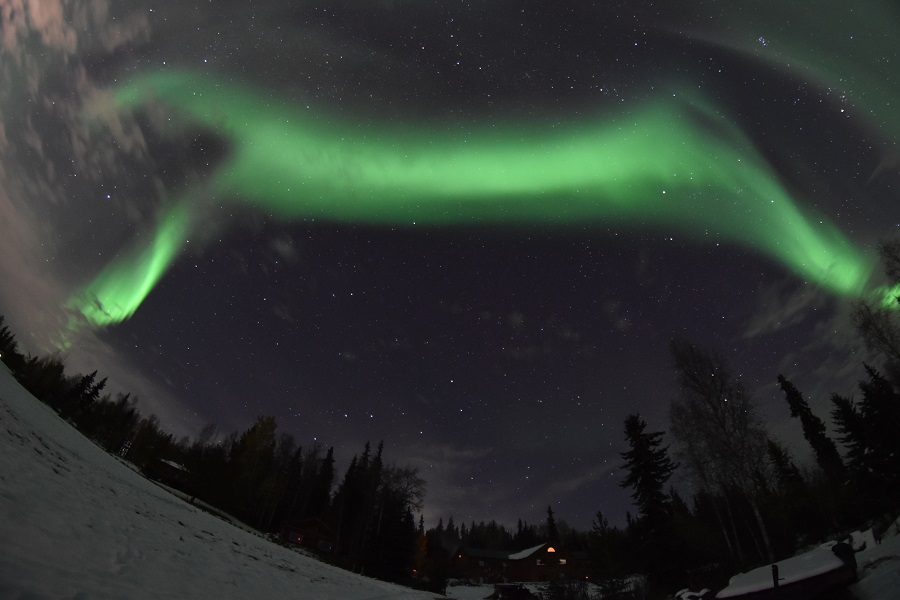 It takes a fish eye lens to capture the breadth of auroral displays.  They literally can migrate across most of the sky.  This is an example of one of the forms taken: “The horse”. Nikon D3100, 8mm lens, ISO1600, 15 second exposure, f/3.5.  Same data applies to the rest of these images. Paul Maley photo. 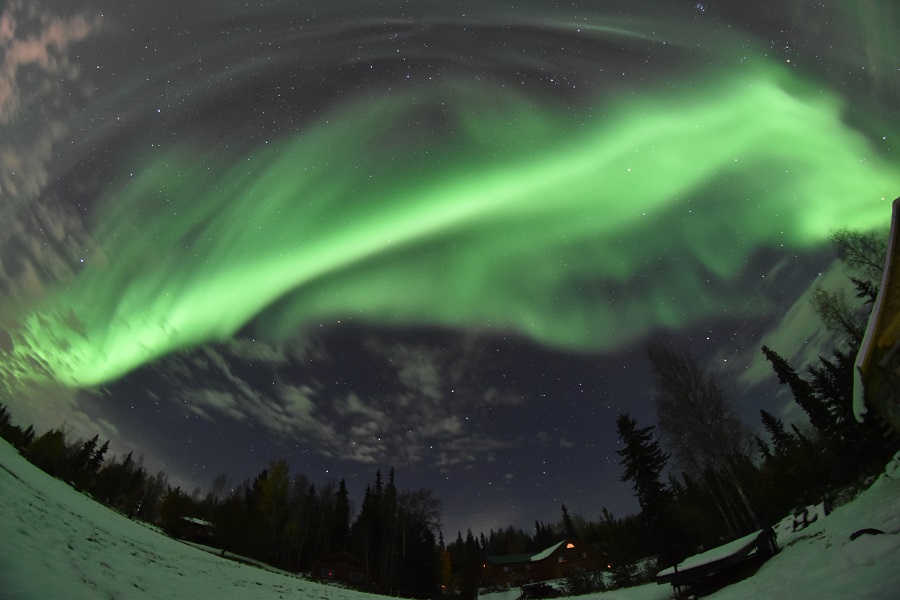 Intensity increased as time passes. Time scale was about 15 seconds for it to change form. Paul Maley photo. 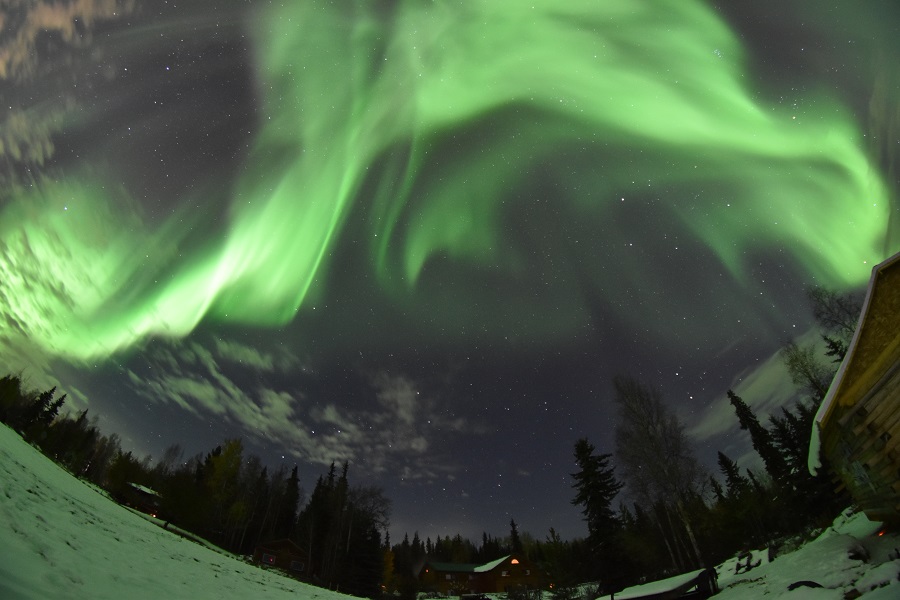 An “ethereal form”. The aurora expands all over the sky.  Paul Maley photo. 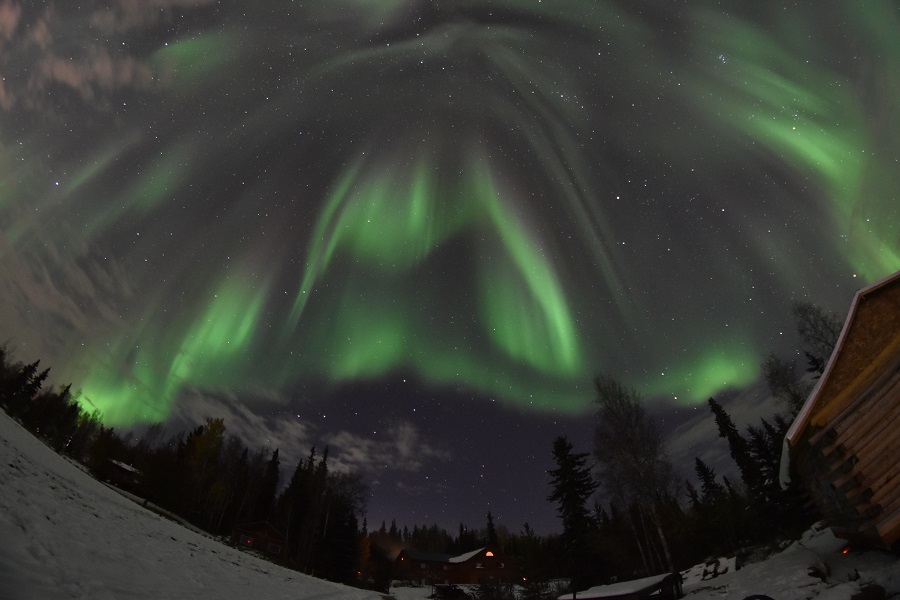 Perhaps the most umbrella like view we had with vertical extensions to the west north and east.  Paul Maley photo. 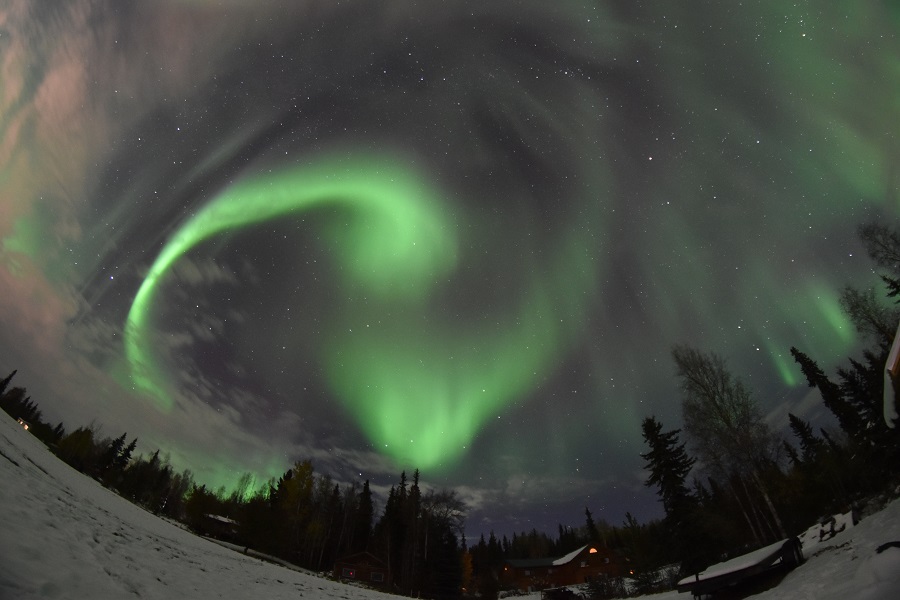 Finally, the curtain falls as the display begins to wind down. Paul Maley photo. 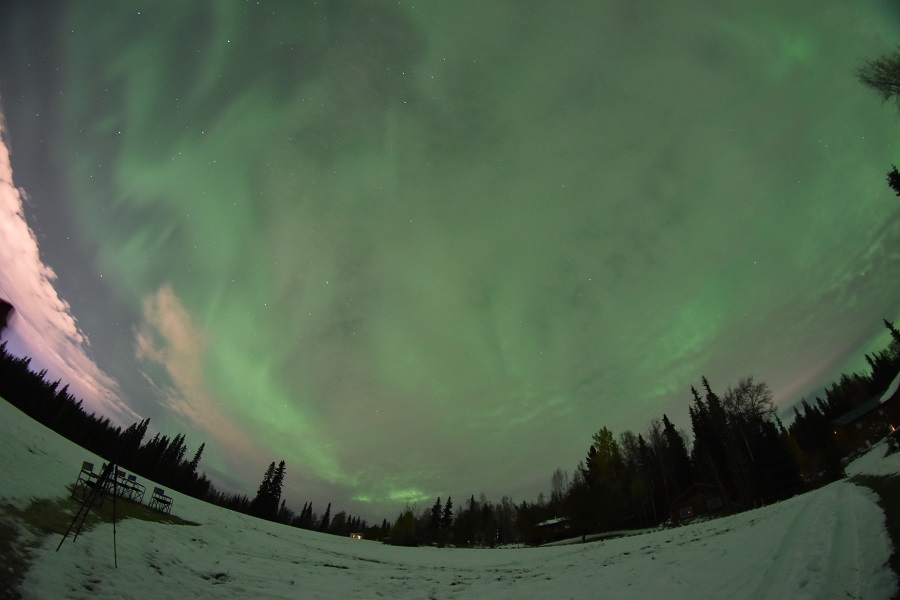 The result as the display ends. This is a ‘fuzz out’ as ‘auroral debris’ fills the sky.  Sometimes this will clear but oftentimes it will subsist for an hour or two.  Paul Maley photo. 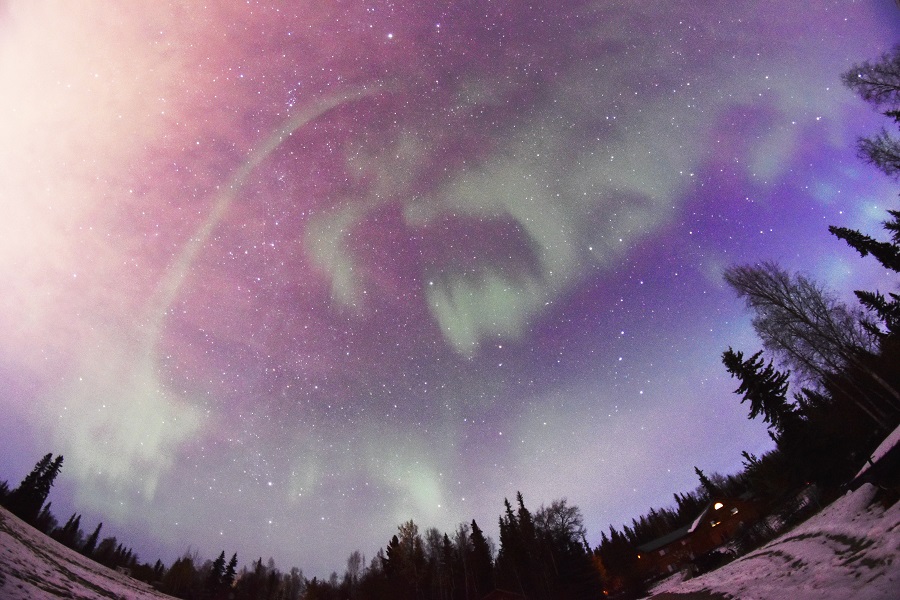 At 610am (2 hours from sunrise) the sky begins to turn blue as the effect of twilight show.  A “hungry piranha” form appears in a very faint display as dawn approaches on October 8.  Paul Maley photo. 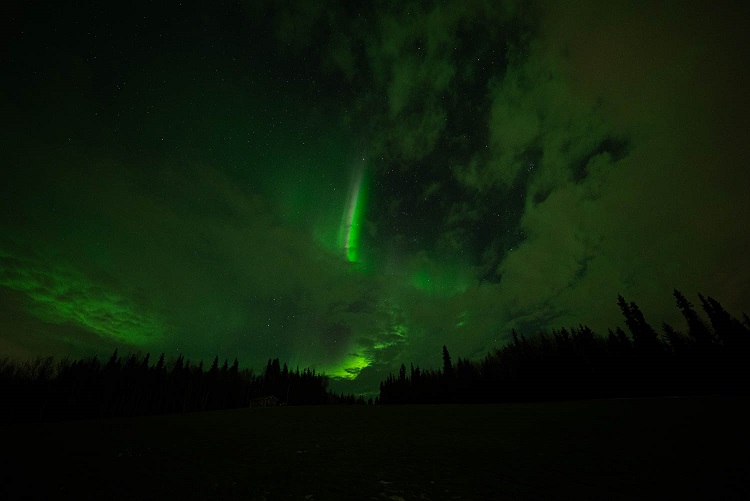 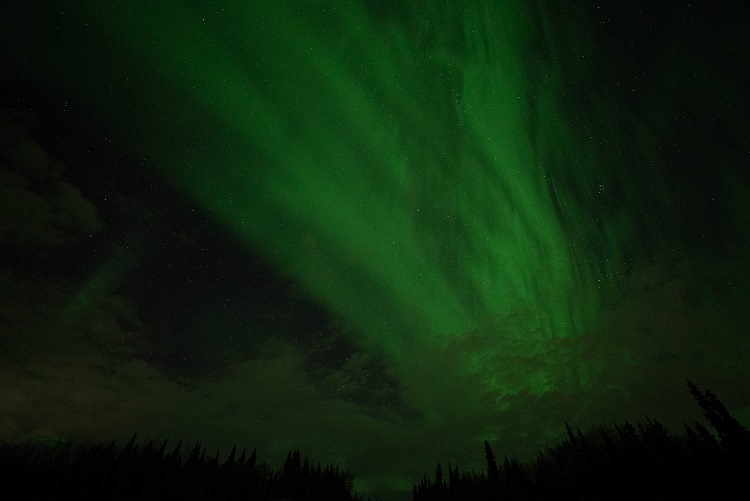 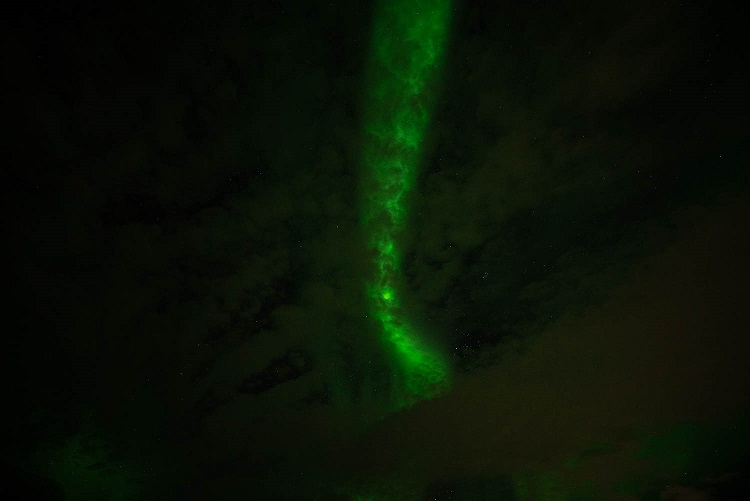